Guillermo Del Toro thinks Let The Right One In is “as delicate, haunting and poetic a film as you’re ever bound to see… a chilling fairy tale.” That’s no small praise from the man who brought audiences films like Pan’s Labyrinth and The Devil’s Backbone.

No surprise, but I would highly recommend Let The Right One In to any viewer interested in quality horror cinema.

The film had the benefit of being written by the author of the source material, John Ajvide Lindqvist (a former stand-up comedian, magician and television writer). Since its publication in Sweden in 2004, the book has been translated and sold in 12 different countries. It is known in the USA as Let Me In. The director, Tomas Alfredson, is more than capable, having been at the helm of several previous features (and several since, all of which have been remarkably well-made). His work, as well as cinematographer Hoyte van Hoytema’s, raises the film above and beyond its genre trappings, turning it into a formidable drama concerning vulnerability and manipulation, innocence and experience.

The two young leads carry the film remarkably. This is their show, and the material succeeds because of their collective performances. Let the Right One In won Best Narrative Feature at the 2008 Tribeca Film Festival and the Gothenburg Film Festival awarded the feature with Best Film & Best Cinematography awards.

The story takes place in Sweden, circa 1982, in a suburb of Stockholm. Everything is snow and ice and frozen breath. Oskar is twelve years old, bullied relentlessly, and has violent revenge fantasies. New neighbors move in, an older gentleman and a much younger child, Eli‚ who appears to be Oskar’s age, and the filmmakers waste no time revealing their bloody business.

Murder happens in a very matter-of-fact way in this drama. And I do not think it is because of an insensitivity to the act, but because it is such a natural part of Eli’s existence. Such is the life of a vampire, I suppose.

You will read lots of reviews for this film that call it a “coming-of-age” tale, and in its own minor way this is true. It is Oskar’s coming-of-age story, but it is a disservice to the story to see it only in that light, because it is a very different story when seen from Eli’s point of view.

Vampires in fiction have been largely neutered. The cliché is to paint them in glorious, gothic trappings… to make them seem like objects of desire. Or, in the hands of even less imaginative artists, they become nothing more than murderers, existing to move some tired plot forward.

Eli doesn’t do this out of spite or malicious intent. It is the unfortunate life of a parasite. To deny those impulses would be akin to committing suicide. Eli may be morbid, but not morose. Eli wants to live and needs Oskar to do so.

This is a film about two individuals who, for better or for worse, come to together. Both need companions to really survive. And yes, they seem to service each other’s needs, but does this make them soul mates? Maybe they love each other, maybe they don’t. Perhaps, out of their particular kinds of desperation, they just need? In a world filled with cruel humanity, perhaps this is the best a “monster” can hope for.

The closing moments take place on a speeding train, and I’m reminded of the last moments of The Graduate, where Dustin Hoffman and Katharine Ross are riding into an uncertain—and possibly unhappy—future. Love can have an unreasonably heavy price, be you human or inhuman.

Sometimes what you love will ultimately destroy you. Can you live with that?

I met director Tomas Alfredson, years ago, and we spoke about the film at some length. The following is an excerpt from that conversation:

Why did Alfredson set the film in 1982? Alfredson’s answer is at first a little disconcerting.

“It’s autobiographical,” he says and with a grin, adding, “except for the vampire stuff.”

Alfredson admitted to knowing “nothing” about vampire fiction in folklore or film and relied only on what the author, Lindqvist, supplied him, because what drew Alfredson to the material weren’t the more exploitative elements but the fact that the material was “an unsentimental attack on complicated themes.”

Instead of turning to classic films or books, Alfredson sought inspiration elsewhere.

“I studied Renaissance painters,” he says, specifically, “when it comes to lighting and colors.”

He cited, among others, Hans Holbein as a key to his film’s visual motif.

What about the “cold” look of the cinematography?

“It is very hard to capture cold on film,” Alfredson admits.

So they went north where cold was in abundance.

“We filmed in temperatures of 30 Celsius (-22 Fahrenheit),” he says, “cameras were stopping … I got frostbite in two fingers.”

Alfredson has no regrets concerning the extreme temperatures during the shoot, adding that the conditions played a large part in the end result.

“It’s a strange kind of poetry,” he says, “the light is like knives.”

Light like knives is an altogether appropriate metaphor considering the film’s subject matter.

Responses to the film were resoundingly positive, and the production proved to be a success, so naturally there will be a sequel, right?

“I’m not a sequel kind of guy,” Alfredson reassures.

I had noticed Alfredson doodling in between interviews and I asked to see what he’d drawn. It was a funny little caricature and he let me keep the sketch. 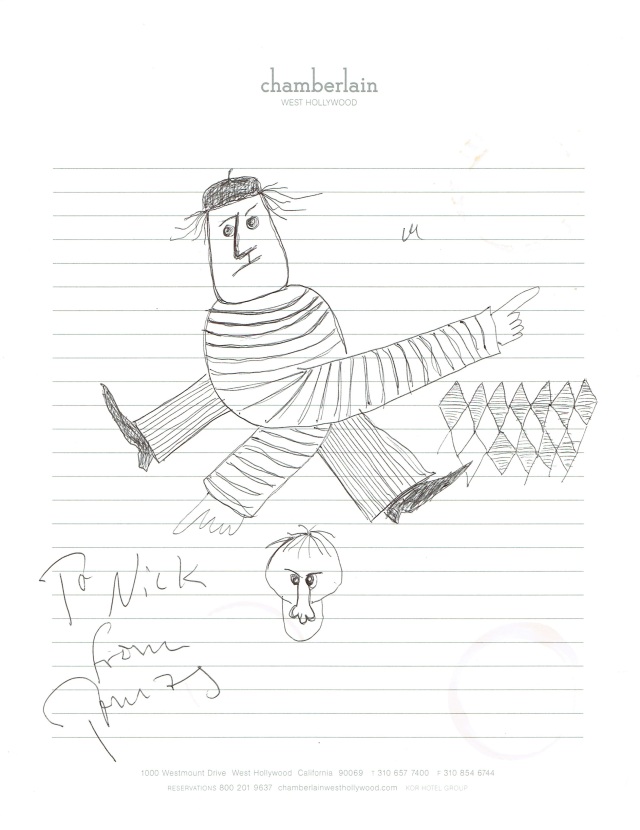 *Classic Shit! started in 2009 as a semi-regular article for the website We Are Movie Geeks. It has been on hiatus for a long time, and I’ve decided to finally resurrect the column, reprinting older pieces as well as adding new ones, all of which will focus on film.