Before I begin my review of Hatchet, let me reference a much better movie.

In David Cronenberg’s The Fly, Seth Brundle learns that his teleportation device doesn’t work correctly. It likes to turn his test subjects inside out. This happens because the device doesn’t understand flesh. In a latter scene, Brundle does an experiment with some steak and relates the problem to his girlfriend:

“The computer is giving us its interpretation of a steak, it’s translating it for us. It’s rethinking it rather than reproducing it and something is getting lost in the translation.”

Now replace “computer” with “director” and replace “a steak” with “a horror film.” 

Hatchet was supposed to be a return to “old school American horror,” right? What school are we talking about? This film has none of the aggressive chaos on display in Tobe Hooper’s Texas Chainsaw Massacre, none of the imagination of A Nightmare on Elm Street. Where is the atmosphere, the sense of dread? This movie looks like it was filmed in the woods and lit with a floodlight. When I think of “old school American horror,” I think of films like Universal’s classic monster movies. I think of the Robert Wise classic The Haunting, or Polanski’s Rosemary’s Baby . . . any of the previously mentioned horror films, really.

Now, those are all much older films and I understand that Hatchet is not trying to emulate them specifically, so where does that leave me? I guess “old school American horror” is supposed to mean An American Werewolf in London? Maybe it’s The Evil Dead? Am I supposed to believe Hatchet has American Werewolf’s humor and pathos? Hardly. The jokes on display here are of the dick, pussy, and fart variety. Exposed breasts get a laugh, too, because—you know—tits are funny, dude.

And who are all these characters populating the film? With the exception of two boys, they are all strangers to each other, thus making them strangers to the audience. Their deaths carry no weight; they are merely on display for your enjoyment: Violence, minus the consequence or emotion, pure masturbatory voyeurism.

And before you think I’m being judgmental towards those who enjoy a good gore film, please understand that I am one of those people. I’m a gorehound at heart (Peter Jackson’s Dead Alive being a personal favorite), but this movie can’t even satisfy that, with the exception of one totally awesome kill: 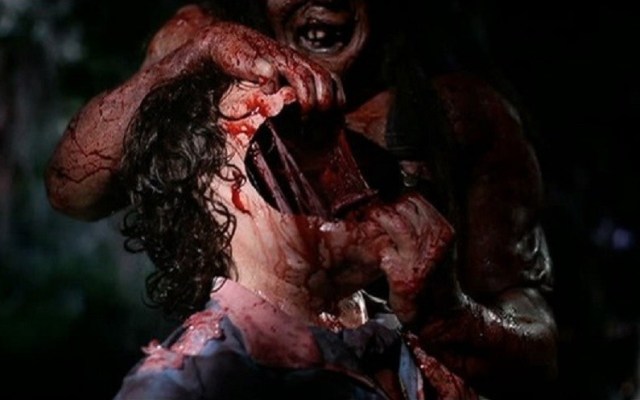 Patrika Darbo (in a thankless role as an annoyingly bitchy-wife stereotype) has her head torn clean in half. That moment is the one true money shot of the film. Kudos rightfully goes to John Carl Buechler. I only wish the film had more of this. The kills on display, barring this left-field showstopper, are underwhelming in their execution or kept in the dark because they look like shit, which is an easy task considering the inept lighting.

Hatchet also has one of the most abysmal scores I have ever heard in a horror film, courtesy of Andy Garfield. All the instruments are synthesized, and quite obviously, even distractingly so. This score has no identity, no recognizable theme.

So, besides a single gnarly kill, did I like anything about this movie?

There is a certain kitsch value in the inclusion of Robert Englund, Tony Todd, and Kane Hodder. Joel Moore went on to bigger, better things. The guy that got farted on in One Crazy Summer gives me a warm sense of nostalgia. And, of course, Richard Riehle is always a welcome face, a really talented guy who always manages to bring more to a role than what is required. Riehle is a top-shelf character actor, always.

On the DVD’s special features, director Adam Green relates a childhood story about summer camp and how he told other little kids spooky stories about Hatchet Face. He talks about almost getting kicked out of camp because all those kids got so scared. Then he says he sat on that story for 20 years, and remarks “…an 8-year old really thought of this, and I don’t know what that means but it worked.”

Well, I can tell you what it means.

Only an 8-year old would think this is funny, or scary. And I’m sorry if you’re reading this and getting all offended, but come on. Hatchet is poorly made juvenilia, at best. That it has several sequels doesn’t surprise me in the least. Horror fans are the most forgiving target audience you could ever hope for. After all, a company like The Asylum not only exists but thrives, and while lots of latter-day fans were made convert by their Sharknado films, the early days of that company were shouldered by some of the worst horror productions ever cobbled together (the lesson being that if you want a stab at a career in movies, then make a horror flick).

Hatchet is the cinematic equivalent of a piece of bubble gum, except when you pop it in your mouth it tastes just like shit.

I’d rather be looking at an inside out baboon.

[Portions of the article originally appeared at We Are Movie Geeks]

I wrote this review in January of 2008 and it was published that February. It remains one of my meanest reviews, which I normally avoid, as I don’t like blasting someone’s effort. But at the end of the day I 100% hated the movie and stand by my critique. And I totally get that Hatchet is a throwback to movies like 1981’s Madman but that shit is hardly what I’d call old school American horror. Madman, and its ilk, were cheapie and sometimes really fun and imaginative slasher movies meant to turn a quick profit. In the end, that’s what Hatchet amounted to, an effort to turn a quick profit. Honestly, at one point, I thought that maybe I just wasn’t in the mood for Hatchet‘s particular charms, though subsequent viewings have never done anything to change my initial opinion.

And that’s all it is in the end; one person’s opinion.

Obviously, loads of people really liked the film—or at least it made somebody a decent return, because they keep pumping out sequels.

So, you know what? Good job, Adam Green! You did something rather remarkable. You made a film that performed well and went on to become a franchise. You are a rare bird. The opinion of anyone, let alone me, is bottom of the barrel when taking into consideration an artistic endeavor. Critics are fine and an audience is even finer but ultimately the be-all and end-all is the finished product. Without a finished product, there is nothing. Want to be a filmmaker? Make a movie. Want to be a writer? Finish a story. Do the goddamn work. Everything else is dependent on that one task.

If you get a chance to work on something, then take the chance, but most important of all is to FINISH THE WORK so you can release it into the world. And in doing so, you release yourself. The work is now its own beast, free to roam, free to find its audience. Free to be enjoyed or despised or ignored or whatever may be the fate of the work.

And you are free to find your next project.

*Classic Shit! started in 2009 as a semi-regular article for the website We Are Movie Geeks. It has been on hiatus for a long time, and I’ve decided to finally resurrect the column, reprinting older pieces as well as adding new ones, all of which will focus on film.