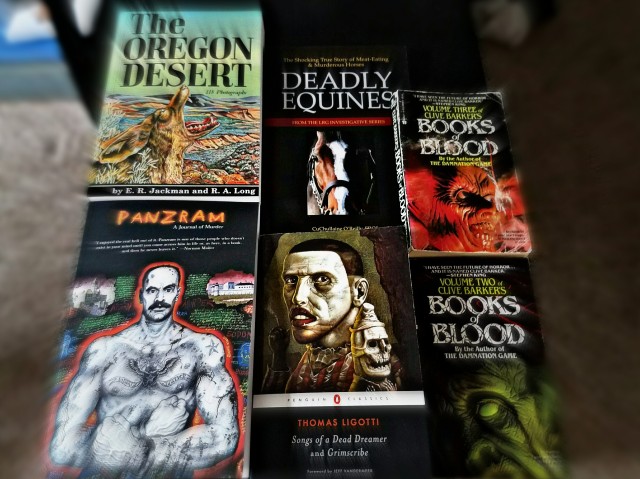 Grind Your Bones to Dust is coming together very nicely. The first part (of four) was just wrapped up, Monday night. I sent the draft to an interested party on Tuesday. As with all things writing, now I wait. But that doesn’t mean I stop writing. And it certainly doesn’t mean I stop reading.

Grind Your Bones to Dust pulls from a variety of different sources. The idea itself was born from an offhanded comment during a cross-country road trip. It was a perfectly ridiculous and horrific instance of “what if” that helped ease the boredom of traveling through the nothing that is northern Nevada/southern Oregon. The comment was made after seeing a sign along the road warning of wild donkey:

“Can you imagine being attacked and eaten by wild donkeys, out here?”

We laughed, and we drove on, leaving that stretch of desolation behind us. And we never saw a single donkey. But that idea never went away. Then, one day, I found myself compelled to take the idea and draft an outline. And then I thought to myself:

Oh shit. I am really going to write this book, aren’t I?

Of course I was going to write it. And I decided very early on that I would play the scenario completely straight. Sure, there is humor to be found in some of the characters and conversations, but the central dilemma is no joke. These animals are mean as fuck, and they are smart, and they are weird, man.

I recently found myself, as one does, reading about serial killers. Now, that bit of reading was done for an entirely different project, but suddenly a whole other side of Grind Your Bones to Dust clicked into place. What if you were to make Carl Panzram a main character in Jaws, while also replacing the shark with four feral donkeys? And just like that, the whole book was laid out before me, from beginning to end. There was no way I would not write this story.

Now, I’ll jot ideas down and draft outlines all damn day, but when I actually sit down to write I have to hone in on my tone. I usually get to there by reading. And, as one of my mentors often stressed, by reading well.

I wanted the narrative to be brutal and beautiful, so I found myself turning to two authors whose work captures that aesthetic wonderfully: Clive Barker and Thomas Ligotti. Grind Your Bones to Dust needed to have that feeling of accidentally wandering into Hell. Nobody does that kind of storytelling better than Ligotti and Barker (in my humble opinion, of course). The Books of Blood, Grimscribe, and Songs of a Dead Dreamer are absolute classics of horror literature and I’ve been reading and re-reading passages obsessively.

And while I don’t utilize too much non-fiction in my own work (though I read a lot of non-fiction), I felt it due diligence to make sure I wasn’t flying too far off the cuff. The Oregon Desert is a fascinating book that mixes history and anecdote and is written in an almost folksy tone. Plus, it is one of the few books that you can find that covers the Oregon desert at any great length, which I find particularly interesting, as the desert makes up an enormous part of the state. Meanwhile, Deadly Equines, while being a much slimmer tome than the former, has given me quite enough ammunition in the department of killer, flesh-eating quadrupeds. The moral of Deadly Equines being that horses can and will fuck you up. Bad.

That leaves me with Panzram: a journal of murder, and what an aptly named book it is. I’d read about Panzram many years ago in Harold Schecter’s A to Z Encyclopedia of Serial Killers, but a journal of murder is the man in his own words. Now, the antagonist in my narrative is not Carl Panzram, but I wanted to take a tour through someone like Panzram’s mind, because the character in my narrative is very much in the mold of inhuman killer.

There you have it, folks. The book soared past 10K words, this week. I’ll pick up where I left off on Monday morning. Hopefully, this second part of the book is wrapping up around the end of September. Then, the third part will be written throughout October. The fourth and final part ought to be done in November.

Grind Your Bones to Dust will, with a little luck, be available sometime in 2019.